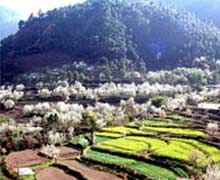 Nalagarh is a city & municipal committee located in the district of Solan. It was known as Hindur during the British Raj. Formed in 1100 AD, by the by the Chandella Rajputs. The entire region is emerging as a production unit for chemicals, leather, steel, thread mills and breweries.

The Chandela Rajputs from the Bundelkhand region of central India ruled over Nalagarh. Tomara, Rathore, Parmar, Pawar, Panwar, Chauhan, Bais were the other rajputs who inhabited the land thereafter. The country was invaded by the Gurkhas for some years before 1815when it was lost to the Britishers who gave it a territory to the Raja. During the 20th century, Nalagarh was a Simla hill state that was ruled by the Punjab government.

Nearest airport is at Chandigarh (58 km) which is connected to cities like Delhi, Mumbai, Bangalore and Srinagar

The nearest railway station is at Ghanauli (14 km).

Nalagarh is actively connected to various cities like Delhi and Chandigarh via a strong bus transport network.

Nalagarh Fort is situated atop a hillock that is believed to be one of the three forts built by the kings of Jaipur. It is one of the most famous attractions in Nalagarh that surrounds lush greenery and is thus visited by an array of travelers.

Fort Ramgarh was erected 350 years ago by a descendant of the Chandel Rajput rulers named Kushal Singh. The fort that is converted into a heritage hotel comprises one of the tallest doors in India that goes up to a height of 37 feet.

Yadavindra Gardens placed at the foothills of the mount Shivalik, is a beautiful garden built in Mughal style of architecture in the 17th century. Designed by Nawab Fadai Khan in “Charbagh” pattern, the gardens comprises a middle waterway bounded with flourishing green patches on both sides

Parwanoo is a municipal council and city in the district of Solan in the state of Himachal Pradesh. The industrial town is bordered with the Panchkula district (Haryana) and falls on the Chandigarh Shimla Highway after Pinjore and Kalka. Parwanoo is separated from Kalka by a river bed.

Dhali is on the Shimla highway situated on the northern outskirts is a famous attraction that is far-famed for its meat pickle shops.

Travelers can also find a resort on the Shimla highway that offers finest accommodation and owns a cable car called Timber Trail.

Renuka Lake is a beautiful sight in Parwanoo. It is the largest lake in the entire state of Himachal Pradesh.

Subathu is a famous Gorkha Fort that was erected in the region.

How to reach Parwanoo :

The nearest airport is at Chandigarh.

Kalka station (4 km) is the nearest broad gauge rail head. The Chandigarh station is another station that is well connected to various parts of the state and nation.

Parwanoo is connected to the nearby regions like Kalka and Chandigarh via various bus services.

The Kasauli is a town as well as camp, situated in the district of Solan in the state of Himachal Pradesh. Kasauli was established as a Colonial hill station during the British reign in the year 1842.

Located close to the Sadar Bazzar, the Baptist Church was erected in the year 1923 from brick and wood as an exemplar of colonial architecture during the reign of the Britishers.

The Central Research Institute initially the Pasteur Institute of India, was founded by Sir David Semple in the year 1904 as an immunology and virological research institute. The research centre works as Collaborating Centre for the World Health Organization. CRI also produces DTP group of vaccines and for diseases like measles and polio.

Inaugurated in the year 1853, Christ Church was originally built as an Anglican church. The main highlight at the church are the stained glass windows that were imported from Spain & Italy that depicts Christ, Mary, Saint Francis and Saint Barnabas.

Nestled in the Gharkhal bazaar near Kasauli, Gurudwara Shri Guru Nanak Ji is located on the Kasauli-Mashobra Road.

The Kasauli brewhouse and distillery was formed in the year 1820s and is one of the oldest existing distilleries in Asia that produces 'scotch whisky'. The famous Kasauli Brewery is also referred as Mohan Meakins.

Established in the year 1880 Kasauli Club was the place for social meetings, tea & dinner dances as well as galas. Made from wood & plaster, the Kasauli Club is one of the major attractions in Kasauli that one must visit. 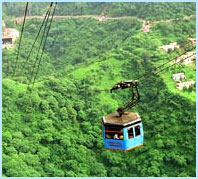 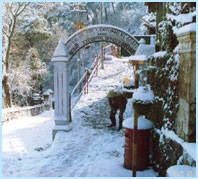 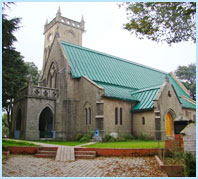 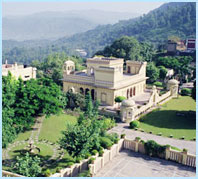 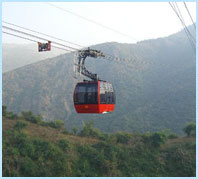