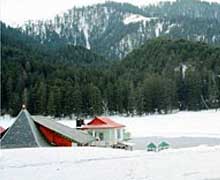 The hill station of Dalhousie is located in the state of Himachal Pradesh at an elevation of 6,460 ft. The town was named after a British Governor general named Lord Dalhousie who established this place as a British summer retreat. Built on a total of five hills, Dalhousie is sprawled across an area of 14 sq km. The serene hill station is one of the most sought after names in the state of Himachal Pradesh. The entire hill station has an array of bungalows & churches that are a perfect blend of the Scottish & Victorian style of architecture.

The hill station was established as a British summer retreat in the year 1854 under the reign of the Britishers as a summer retreat. Built around 5 hills namely Kathalagh, Potreyn, Terah, Bakrota and Bhangora, the hill station is snuggled at the foothills of the Dhauladhar mountain range.

The nearest domestic airport to Dalhousie is at Pathankot. Delhi international airport is actively connected to all major airports in India as well as international flights.

Pathankot is the nearest railhead and is actively connected to major cities like Delhi, Mumbai &Amritsar.

Numerous state run and private buses connected Dalhousie to the nearby regions of the state as well as other states like Punjab, Delhi etc.

Located at an elevation of 2755 m, Dainkund Peak is the highest mountain from where one can have a spell-binding look of the entire valley. The peak can be reached via trekking across the most scenic vistas.

St. John’s Church is one of the most revered attractions located in Dalhousie. Erected in the year 1863, the church is a redolent of the Victorian era that was a replica of England’s Roman Catholic Church.

It is an offbeat destination located in Dalhousie that takes you away from the hustle and bustle of the city. The enthralling destination is surrounded by the most astonishing lush greenery and pleasant conditions.

Dalhousie cantonment is a town in snuggled in the Chamba district.

The hill station of Khajjiar is nestled in the district of Chamba in the state of Himachal Pradesh, India. The beauteous region rests on a plateau at an elevation of 6,500 feet at the foothills of the Dhauladhar ranges in the Western Himalayas. The rarest ecosystems found here comprises lake, pasture and forest.

The hill station of Khajjiar rose to fame on 7 July 1992, when the Vice Counselor and Head of Chancery of Switzerland in India, Mr. Willy T. Blazer christened it "Mini Switzerland". Moreover, he also placed a yellow Swiss hiking footpath sign board that highlights the 6194 km distance between Khajjiar and Berne, the Swiss capital. The counselor also took home a stone from this wonderland that forms a part of a stone collage built around the Swiss Parliament to remind people about the Mini Switzerland of India Khajjiar.

The nearest airport to reach Khajjiar is at Pathankot and Gaggal (Kangra)at 120 and 180 km approx. respectively.

The nearest railway station is at Pathankot that is actively connected to the nearby regions of the state.

Himachal Road Transport Corporation runs various bus services that connect Khajjiar with the major cities within the state as well as outside its boundaries.

The Dauladhar Mountains surrounds the entire region and is one of the most astounding attractions that offer panoramic vistas of the dense pines & deodars as well as lush green hayfields of Khajjiar.

The Golden Devi temple is a famous religious attraction located situated amidst the golf course with a beautiful golden dome.

Encircled by lush green hayfields, Khajjiar Lake is a perennial lake that is located amidst dense weed growth called vacha. The pristine saucer shaped lake is one of the most astonishing attractions that every traveler must visit during their Khajjiar trip.

Khajjinag Temple was erected in the 12th century A.D, beautifully carved out of wood. The temple houses an array of snake idols and worships Naga (snake) god. One can find the images of Pandavas in the temple’s mandapa whereas the Kaurvas hanging circumambulatory path’s roof.

Horse riding is one of the most common activities offered in Khajjiar.

Trekking in Khajjiar introduces travelers to the heavenly beauty of the region.

The Khajjiar meadows are one of the perfect places to enjoy zorbing in Manali that usually comprises an adventure seeker inside a zorb, a transparent plastic ball that is rolled over through a distance. 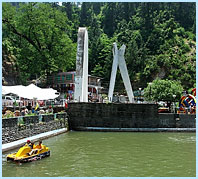 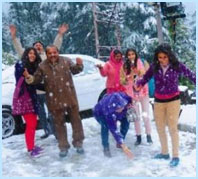 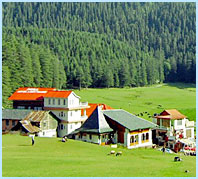 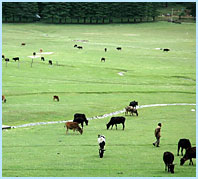