Our representative will welcome and attend you on the airport. You will travel to Shimla in a pre-booked comfy car and transferred to hotel room.

Relax the whole night in your Hotel room in Shimla. Breakfast will be served in the morning in your room. Get yourself ready for local sightseeing in attractive tourist destinations like: Mall & Ridge, Indian Institute of Advance Study, Viceregal lodge, Jakhu Temple, Catholic Church, Library buildings and many more. Transfer yourself to the hotel room and enjoy your diner. Recluse into your cozy bed and relax.

Hot breakfast is served in your room, afterwards plan the trip of Kufri and Himalayan National Park. Later on, experience the adventure on Yak ride. Besides, get on quickly to explore Indira Tourist Park, Fagu, Mahasu Peak etc. You are transferred to your hotel room. Relax yourself for all night long stay at hotel.

Enjoy the Breakfast, and later-on check-out from hotel. Your departure to Delhi is ready.

- 02 Nights & 03 days stay for couple in a pre-booked hotel
- Pick Up and Drop From Shimla Volvo Bus Stand
- Non-Alcoholic welcome drink served
- Couples gifted with fresh fruit basket as soon as they arrive
- Breakfast, including the Morning Tea
- Candle Light Diner
- Evening Tea with Cookies
- Kesar Badam Milk Served in Night
- Half day Sightseeing of Shimla and around in private rented car
- Full day Sightseeing tour of Kufri in private rented car
- All Taxes are Applicable

The Mall Road is strolling ground for tourists. The place is always packed by tourists not only from India, but also outside India. Family restaurants, Clubs, Bars and Post Office are lined all along the Mall Road.

The church is second oldest falling in league of the St John's Church in Meerut. It is located on The Ridge based on the Neo-Gothic style and represents Anglican British community. Christ Church holds immense reverence, with vox - populi for its stained glass windows.

The Lord Hanuman Temple rests on Jakhu Hill, which offers a refreshing view of the entire area. It is also one of the leading pilgrim sites in Shimla, which are often thronged; more prevalent by monkeys than humans.

Laid open to public in 1974, the museum is well-known place for Pahari paintings, wood-carvings, sculptures, costumes, textiles and jewelry of the state. Shimla State Museum It presents an overwhelming semblance of cultural diversity as well as historical relevance of the hill destination.

Established in between the year 1884 and 88, the Indian Institute of Advanced Study, the place was originally known as the viceroy of Imperial India. The complete building was designed and constructed by Henry Irwin. It is interesting to find that Viceregal Lodge had quite advanced firefighting mechanism working through wax-tipped water ducts, way back in 1888.

Summer Hill is located on impressive height of 6,500 ft on the famed Shimla-Kalka railway head. The name is taken after the “Father of the Nation,” Mahatma Gandhi, who lived at stylish and ornate Georgian House of Raj Kumari Amrit Kaur, during his Shimla visits. Summer Hill has Himachal University in its backdrop.

Annandale is a petite beautiful valley place established by Captain Charles Pret Kennedy, who was among the earliest visitors on this pristine land. The valley offers sprawling area, a flattened ground for Indian spot games. Annandale is Shimla’s Heliport.

Tara Devi is a Hindu hill pilgrim site, and seat to the Tara Devi Temple made in honor of “Tara” - the Goddess of Stars. She is the avatar, descending from Durga or Mahadevi, Kali, or Parvati. The name of goddess is symbolic of a star, resembling continuity, though in state of meditation, yet she radiates overwhelming energy.

Constructed by popular English Architect of the living times named- Henry Irwin, The Gaiety Theatre represents a classy and glorious piece of gothic style of architecture. The rooms of this amazing theatre are specially treated for acoustics. Seating arrangements were classified according to ranks, and theatre has categorization for Viceroy, Indian Maharajas and Army officers during Imperial rule. 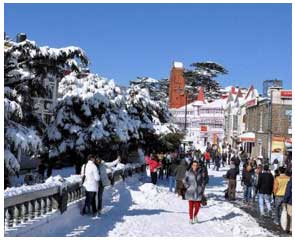 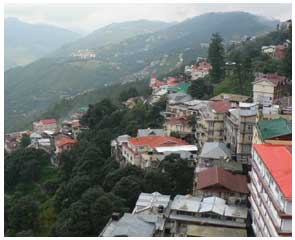 The top hill view of Shimla landscape speckled and interspersed with houses on uneven terrains. 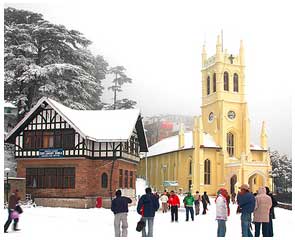 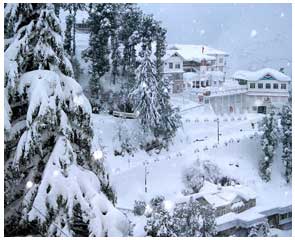 Rediscover the Snow-laden Shimla from lens of a traveler.