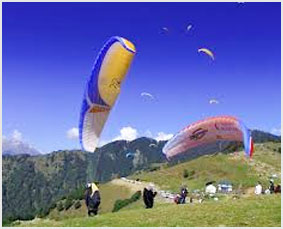 The recreational and competitive sport of Paragliding comprises flying paragliders, which is a free-flying, foot-launched glider aircraft without a rigid primary structure. Being one of the most famous & sought after escapades in the state of Himachal Pradesh, every traveler wishes to try out their hands at paragliding that is a whole new experience for most of the adventure lovers.


Bir-Billing in Kangra district is one of the most famous paragliding sites in the entire world. While Billing (2290 m) is the site from where paragliders take-off, Bir (1400 m) is the landing site in a village. The state of Himachal Pradesh hosts an annual International Paragliding Competition at Bir-Billing that was introduced in the year since 2002 and has been of vital importance in promoting paragliding in the entire state on an international level. Moreover, Solang valley in Manali is another famous destination where travelers can enjoy paragliding with great safety under the guidance of adept professionals. Bundla Dhar (Bilaspur), Kullu valley and Intkali (Pabbar valley near Rohru) are some of the destinations where para gliding can be enjoyed most time of the year.